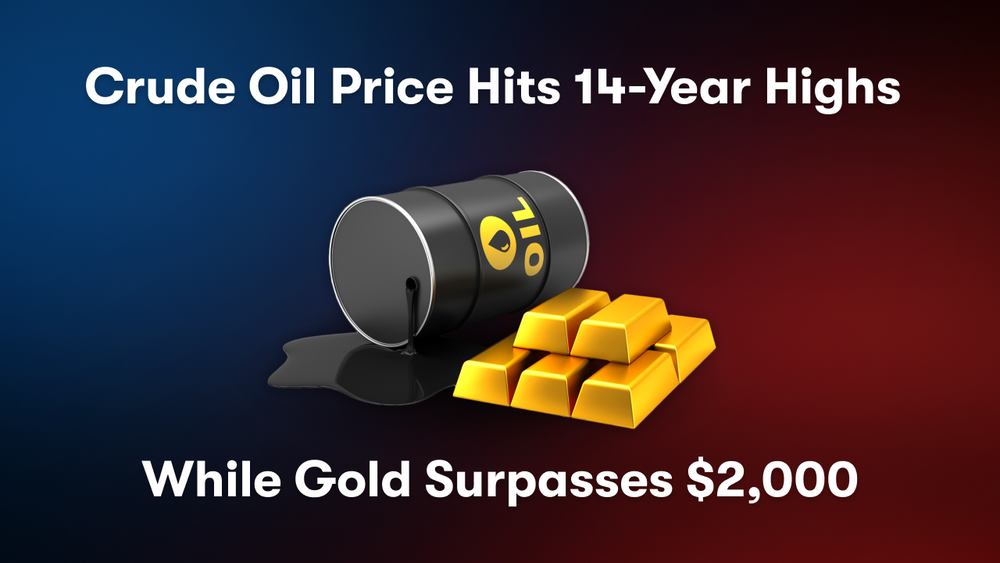 The ongoing war in Ukraine is forcing investors and money managers to rethink their portfolios and risk exposure. Bonds, gold and risk-off currencies (CHF and JPY) are soaring on safe-haven demand. On the other hand, risky assets (mostly high-growth tech stocks) are trading sharply lower on Monday. 📊

$OIL.WTI has gapped sharply higher as investors continue to digest news related to the Ukrainian conflict. The US Secretary of State Antony Blinken said on Sunday that the country’s top bodies are coordinating to impose a US-only ban on oil imports from Russia. 🛢️ 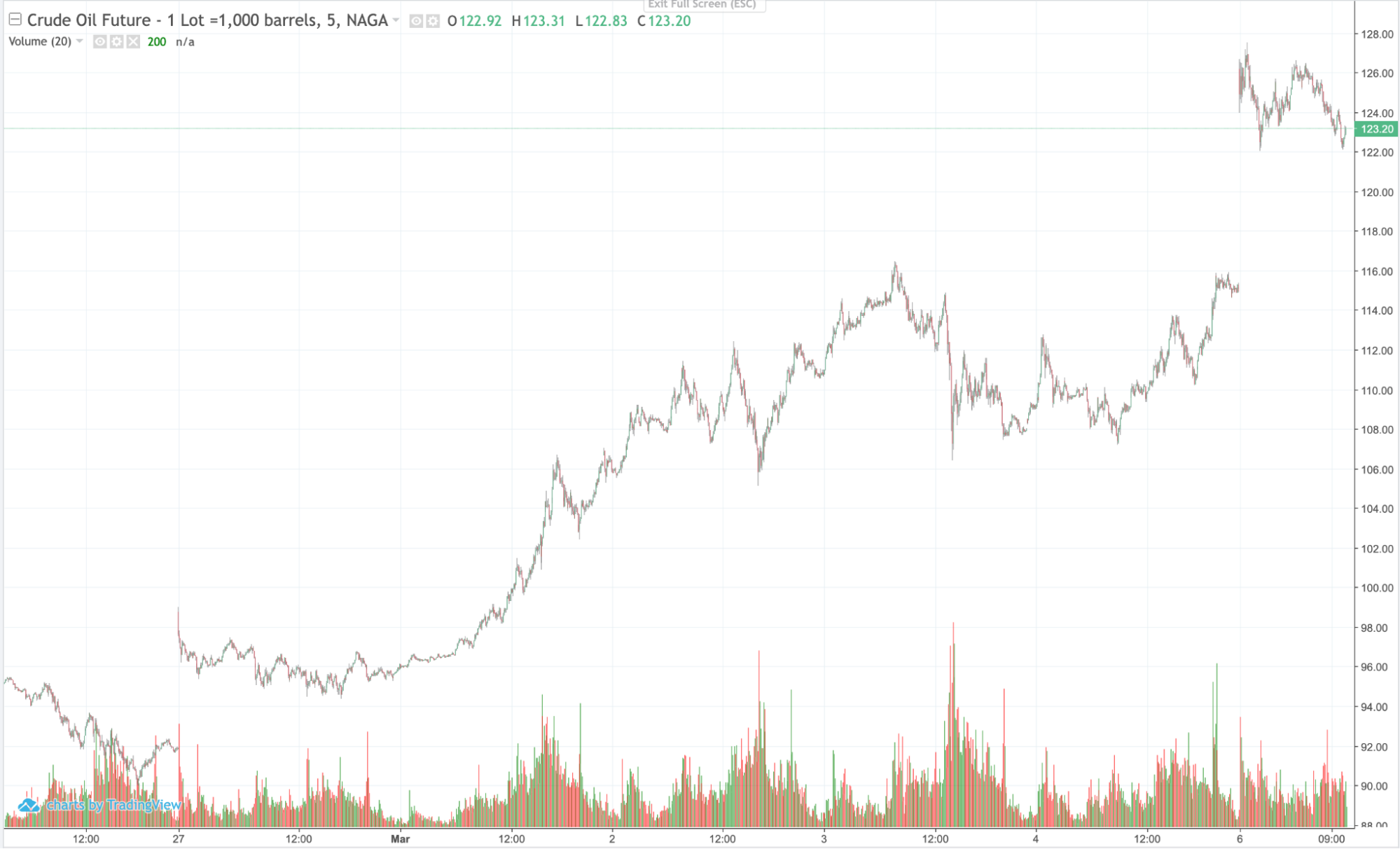 Today’s high of $127.54 marks the highest level seen in crude oil prices since August 2008. Morgan Stanely analysts said earlier that oil could surge to $185 per barrel this year, while Bank of America strategists mentioned a $200 figure.

Technically, the next big resistance is located around the $130 handle.

In the meantime, Blinken also confirmed that the US is actively engaged with its European partners to find ways to introduce a more comprehensive ban on Russian energy imports.

"We are now in very active discussions with our European partners about banning the import of Russian oil to our countries, while of course, at the same time, maintaining a steady global supply of oil," Blinken said to NBC.

Reuters added that European leaders are moving towards banning Russian products, despite the continent’s reliance on Russia for oil and gas.

Moreover, limited progress in talks with Iran is also helping crude oil prices to soar. These discussions have been seen as a potential bearish catalyst for oil prices as removing sanctions on Iran would increase the oil supply. Hence, any delays will be seen as supportive to crude oil prices.

While crude oil prices are surging to trade comfortably above $120, $XAU/USD has briefly exceeded $2,000 per ounce for the first time since August 2020. Strong demand for special metals has resulted in a strong breakout from a channel consolidation pattern in gold. 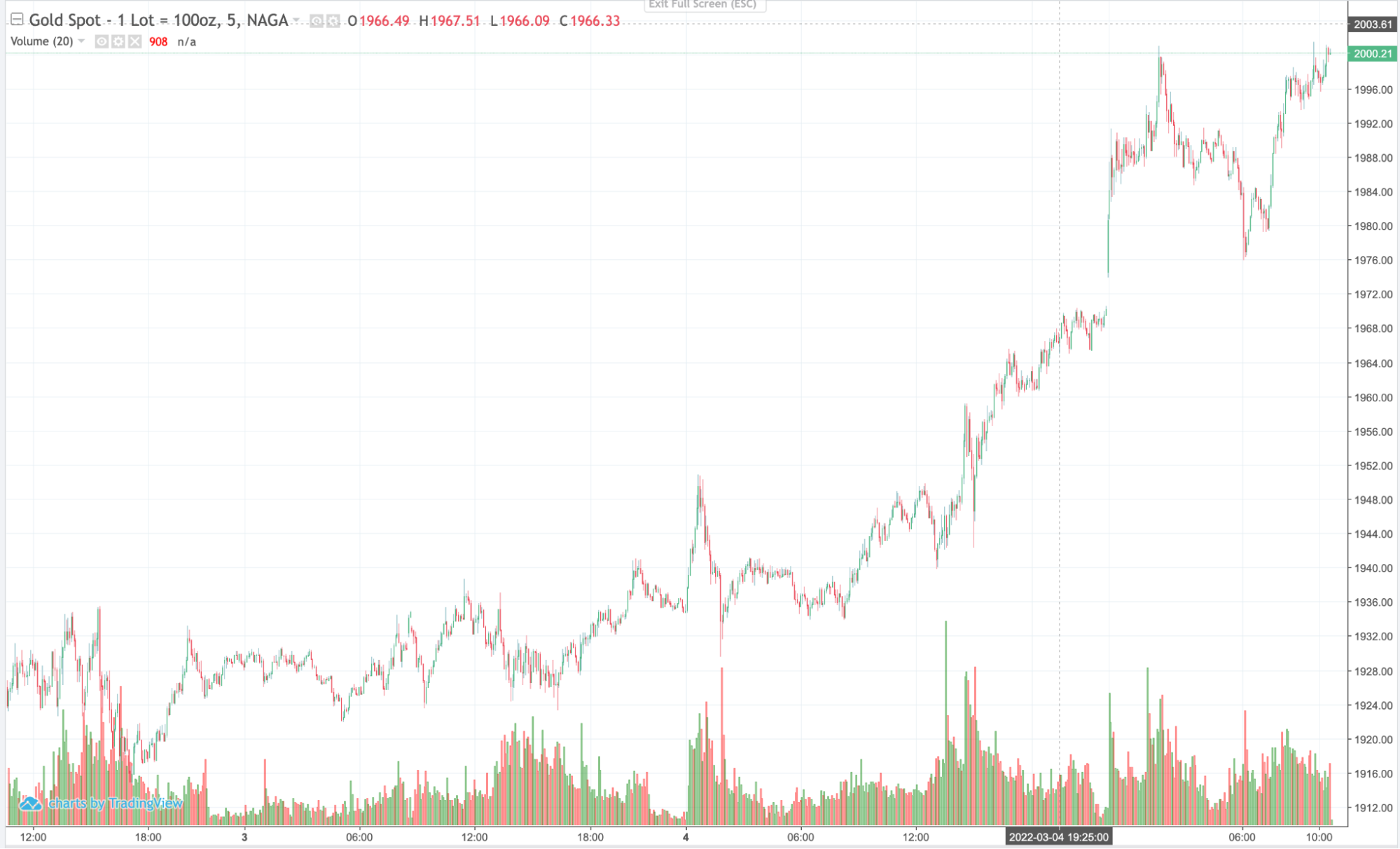 As gold trades around the $2,000 mark, palladium prices are trading at an all-time high on fears that the Russian invasion of Ukraine will create supply problems.

"Gold will likely find some heavy traffic around the $2,000 level initially, but once it is cleared, assuming no change in the Ukraine situation, it will quickly move to the $2,100 region and on to new all-time highs," senior analyst Jeffrey Halley told Reuters.

Technically, gold prices are meeting strong resistance around $2,000, which also hosts a 78.6% Fibonacci retracement level of the 2020 correction to $1,680. This retracement also created a double bottom pattern which was activated after gold broke above $1,915 earlier this month.

The measured target of the double bottom formation is $2,150, which is the next big target for buyers in case $2,000 is cleared.

Disclaimer: This information is not investment advice or an investment recommendation and should not be considered as such. The information above is not an invitation to trade and it does not guarantee or predict future performance. The investor is solely responsible for the risk of their decisions. The analysis and commentary presented do not include any consideration for your personal investment objectives, financial circumstances, or needs.