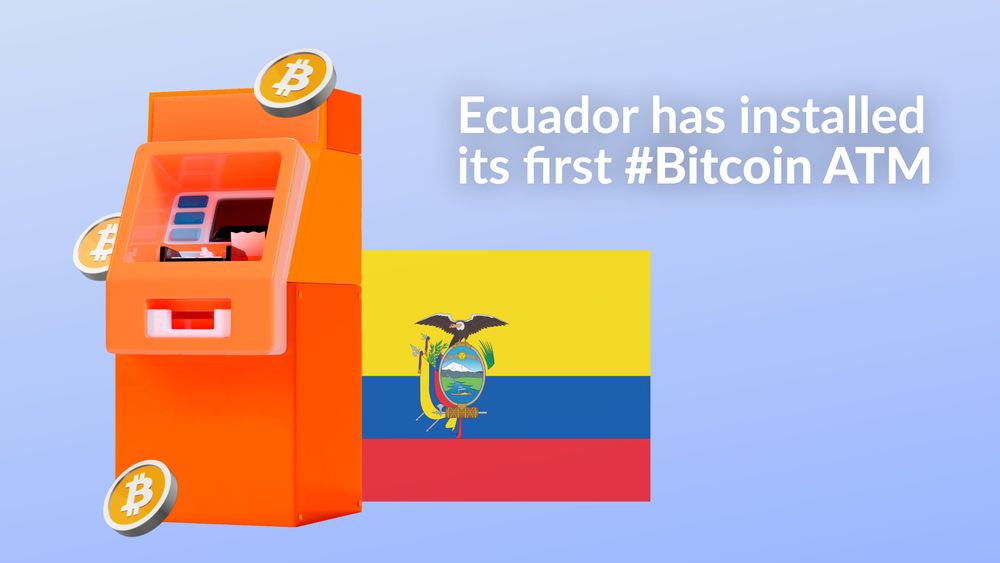 Ecuador has installed its first $BTC/USD ATM, following in the footsteps of other South American countries.

Cryptocurrency is becoming increasingly popular as time passes. It is also becoming more mainstream, with crypto ATMs already being installed in various world regions. Ecuador is reported to have installed its first Bitcoin ($BTC) ATM, making Ecuador the latest South American country to join the likes of Colombia, Brazil, and Argentina. The South American continent had a total of 87 Bitcoin ATMs before Ecuador's installation, according to coinATMradar, this figure represents an estimate of 0.2% of Bitcoin ($BTC) ATM installations globally.

According to the report, Ecuador's first Bitcoin ATM was installed in Santa Ana de los Cuatro Ríos de Cuenca, also known as Cuenca. The ATM has a fingerprint scanner in case the requirements change, but it does not have KYC.

Social media's reaction to the news

The majority of Twitter appears to be swamped with people who are enthusiastic about the new development and the potential for Bitcoin acceptance to grow globally. On the other hand, some users described it as "as useless as the ones from El Salvador." Some people appear doubtful about how useful this Bitcoin ATM will be, given that practically everyone has a cash app on their mobile devices.

There are around 28,000 Bitcoin ATMs worldwide, most of them located in the United States. North America has the most Bitcoin ATMs with nearly 90% of the global market. Genesis Coin and General Bytes are the two largest manufacturers of Bitcoin ATMs today. The first bitcoin ATM opened on October 29, 2013. It was a Robocoin machine in Vancouver, Canada's Waves Coffee Shop. It only ran until 2015, owing to Bitstamp's operational issues, yet it is commonly regarded as the world's first Bitcoin ATM.

Bitcoin ATMs, like the cryptocurrency itself, face numerous regulatory challenges. But agreement has been reached that Bitcoin ATMs must follow the same laws and regulations as traditional ATMs.

Sign up on NAGA to trade $BTC/USD and other cryptocurrencies.

IMPORTANT NOTICE: Any news, opinions, research, analyses, prices or other information contained in this article are provided as general market commentary and do not constitute investment advice. The market commentary has not been prepared in accordance with legal requirements designed to promote the independence of investment research, and therefore, it is not subject to any prohibition on dealing ahead of dissemination. Past performance is not an indication of possible future performance. Any action you take upon the information in this article is strictly at your own risk, and we will not be liable for any losses and damages in connection with the use of this article.

RISK WARNING: CFDs are complex instruments and come with a high risk of losing money rapidly due to leverage. A high percentage of retail client investors lose money when trading CFDs with this provider. You should consider whether you understand how CFDs work and whether you can afford to take the high risk of losing your money.