Alphabet (Google) reported weaker-than-expected earnings and revenue 📊 for the second quarter, 2022. Moreover, the figures declined in all key parameters, including revenue on YouTube, advertising sales on Google and the cost of purchasing traffic.

👇 Here’s how the company did:

Alphabet’s (Google) fiscal 2022 Q3 and Q4 📈 were successful, as revenue and earnings were up nearly 30% in those periods. This was due to increased consumer activity and recovering markets. However, since the beginning of 2022, the company has been struggling amid geopolitical tensions and economic instability.

In Q1 2022, Alphabet’s (Google) earnings per share were below 📉 the forecast and revenue was in line with the consensus. Q2 was even worse, as all indicators are below the forecast.

Porat also characterized the current outlook as one of “uncertainty in the global economic environment.”

This is probably a signal that in the next fiscal quarter, the company will not be able to recover its position and show the best result among the tech giants.

Because advertising revenue 💵 increased just 12% to $56.3 billion, as marketers reeled in their spending to manage inflationary pressures. The most notable deceleration was in the YouTube division, where sales rose 5% after jumping 84% in the same period a year ago.

What to Expect from Alphabet (Google) Shareholders 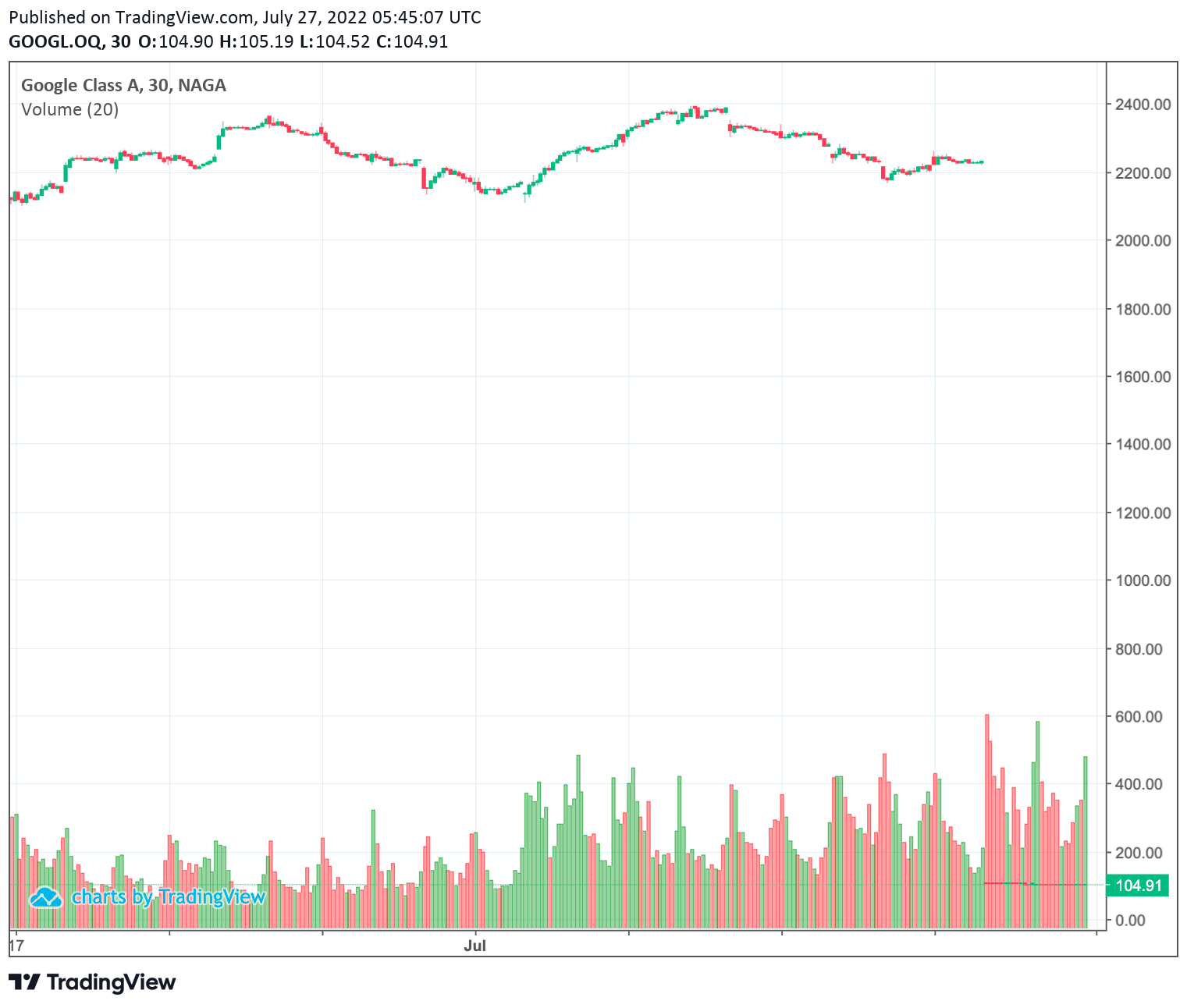 Despite the negative quarterly earnings report, the shares of Alphabet (Google) remain stable. This comes against the backdrop of Snap announcing disastrous quarterly results and saying it plans to slow hiring because “prospect visibility remains incredibly challenging”.

But in contrast to Snap, Alphabet shares rose slightly after its numbers were released, as investors may have been expecting more troubling signs.

The market reaction to this situation could potentially be long-term 🕜 Therefore, a decline in the value of Alphabet (Google) shares is could be more possible in the next few months than a rapid rise.

In addition, the revenue of some of the company’s projects has increased. But that didn’t help the giant improve its results. For example, Google’s Search and other revenue was $40.69 billion, up from $35.85 billion the year prior, the report showed. That growth was boosted by travel and retail queries, said Philipp Schindler, Google’s chief business officer.

In general, representatives of the company expect that the current difficulties will last at least until the end of 2022 📊

IMPORTANT NOTICE: Any news, opinions, research, analyses, prices or other information contained in this article are provided as general market commentary and do not constitute investment advice. The market commentary has not been prepared in accordance with legal requirements designed to promote the independence of investment research, and therefore, it is not subject to any prohibition on dealing ahead of dissemination. Past performance is not an indication of possible future performance. Any action you take upon the information in this article is strictly at your own risk, and we will not be liable for any losses and damages in connection with the use of this article.
RISK WARNING: CFDs are complex instruments and come with a high risk of losing money rapidly due to leverage. A high percentage of retail client investors lose money when trading CFDs with this provider. You should consider whether you understand how CFDs work and whether you can afford to take the high risk of losing your money.
Related articles
Markets
Top 5 Companies to Report Quarterly Earnings this Week
21 November 2022
147 views
Below is a weekly earnings list of the most important upcoming quarterly reports scheduled to be released by publicly traded companies
Markets
What's going on in the oil market?
18 November 2022
132 views
Over the past week, the oil market has been under pressure from various fundamental factors, ranging from forecasts of lower oil demand to news from Poland and China. What are the forecast oil prices?
Markets
US Inflation Eased to 7.7% in October | Market Reaction
10 November 2022
225 views
Inflation eased to 7.7% in October as underlying price increases excluding energy and food slowed from a four-decade high.
Load more
Markets
CFDs on StocksCFDs on IndicesCFDs on ForexCFDs on CommoditiesCFDs on FuturesCFDs on ETFsCFDs on CryptoReal StocksAll markets
Platforms
NAGA WebiOS appAndroid appMT4MT5All platforms
Social Trading
Auto-CopyLeaderboardCopy PremiumSocial TradingNAGA Feed
Help & Support
FAQ →Help Center →Contact usComplaint Form →Customer Support
Pricing & Terms
Deposit methodsFeesTrading HolidaysExecution policySpreadsRegulation and Licence
Company
CareersContact usWhy choose NAGAPress & Media
Free Education
NAGA AcademyEconomic calendarWebinarsBlog
Products & Tools
NAGA Pay →NAGA Stocks
Follow

Affiliate programs are not permitted in Spain for the investment service commercialisation or client acquisitions by unauthorised third parties.